And why you should trek in the Himalayas too!

I was only 18 when I went on my first himalayan trek.

That year was all about trying new things and kinnnnd of getting an idea about who I am from the inside. (Still haven’t figured it out, but am definitely a lot closer now)

Turning 18 is a milestone; so I wanted to bring in my birthday differently. Little did I know that choosing to go on a himalayan trek would have such a deep impact on my life! 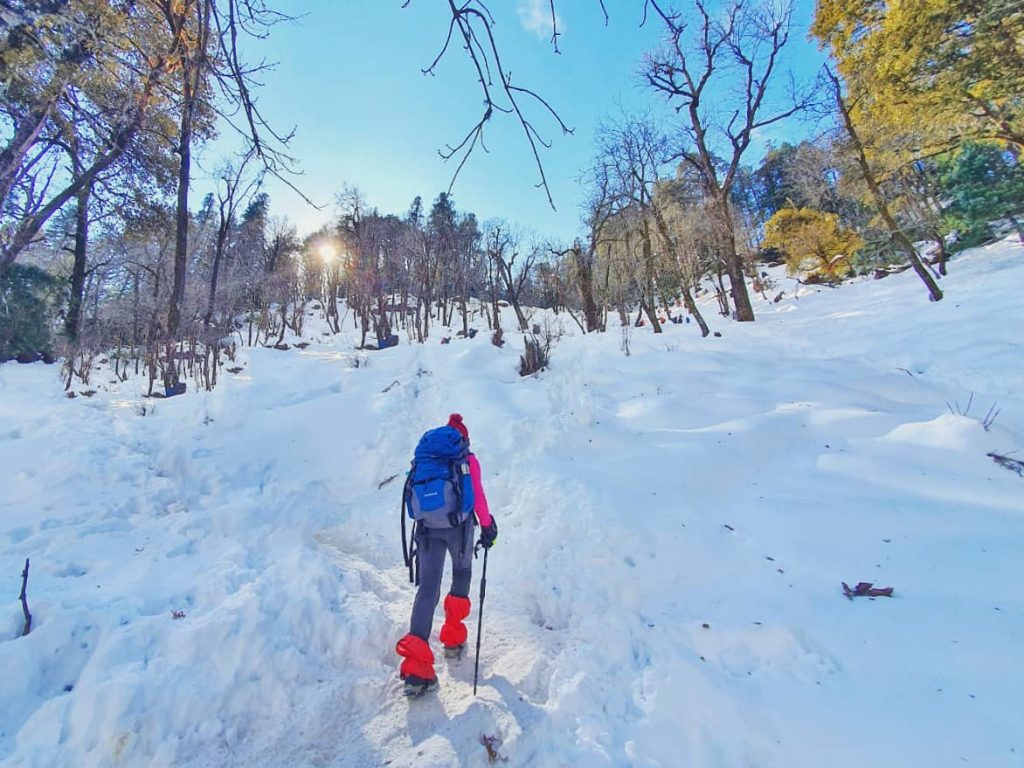 After my first trek, there was just something about the mountains that kept calling me back. I’ve sometimes gone there for trekking in the Himalayas and other times just to unwind and relax. I’m a mountain child and that’s where I’m most at peace.

So here are some of the most important life lessons that being in the mountains taught me. Especially trekking in the Himalayas. 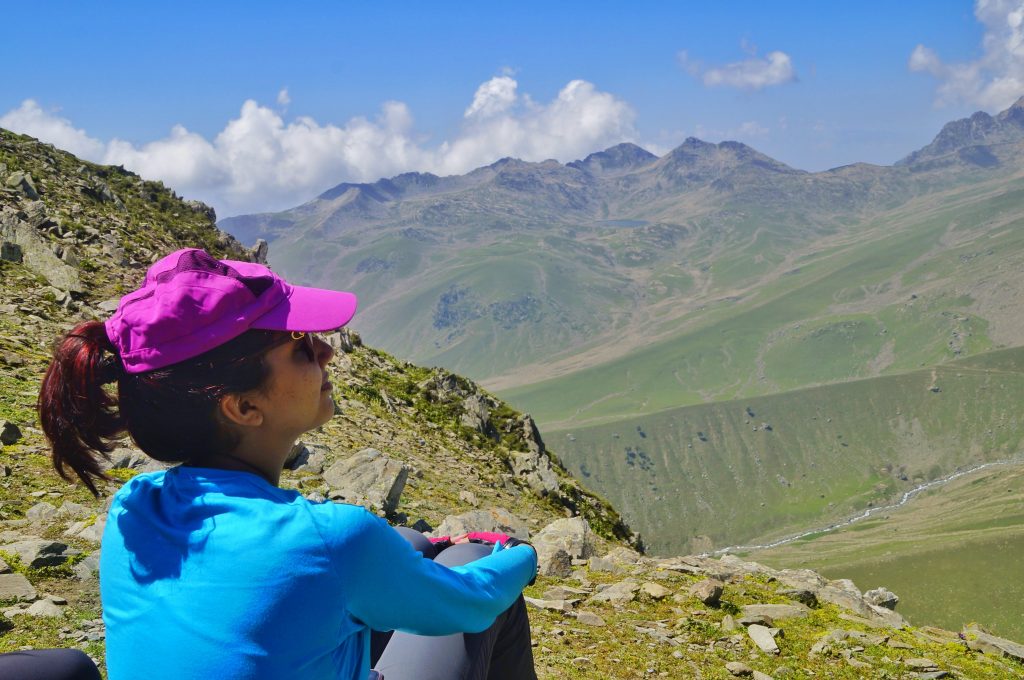 Lesson #1: Things will get better with time.

Within the first one hour of my trek in the Himalayas I FELT LIKE RUNNING BACK HOME!
Imagine this: a girl with a rucksack double her size, filled to its utmost capacity…to the point where you can neither look up nor walk straight because of its sheer heaviness.

But my trek guide offered to help me with my rucksack, which I offloaded later.

What this taught me: With time you will either adjust to the change or find a solution to adapt. Both ways..things will get better. All you need is to give it some time.

You may also like: 8 unexplored places near Goa that’ll leave you in awe

Lesson #2: You need people in your life.

I don’t know who needs to hear this but you do need people in your life!!
Still not sure why we have made the concept of “I don’t need anyone” cool. Especially the millennials.

Sure, you shouldn’t rely on someone else for your happiness but at the same time we can’t overlook the fact that we are social beings and do need people in our lives. 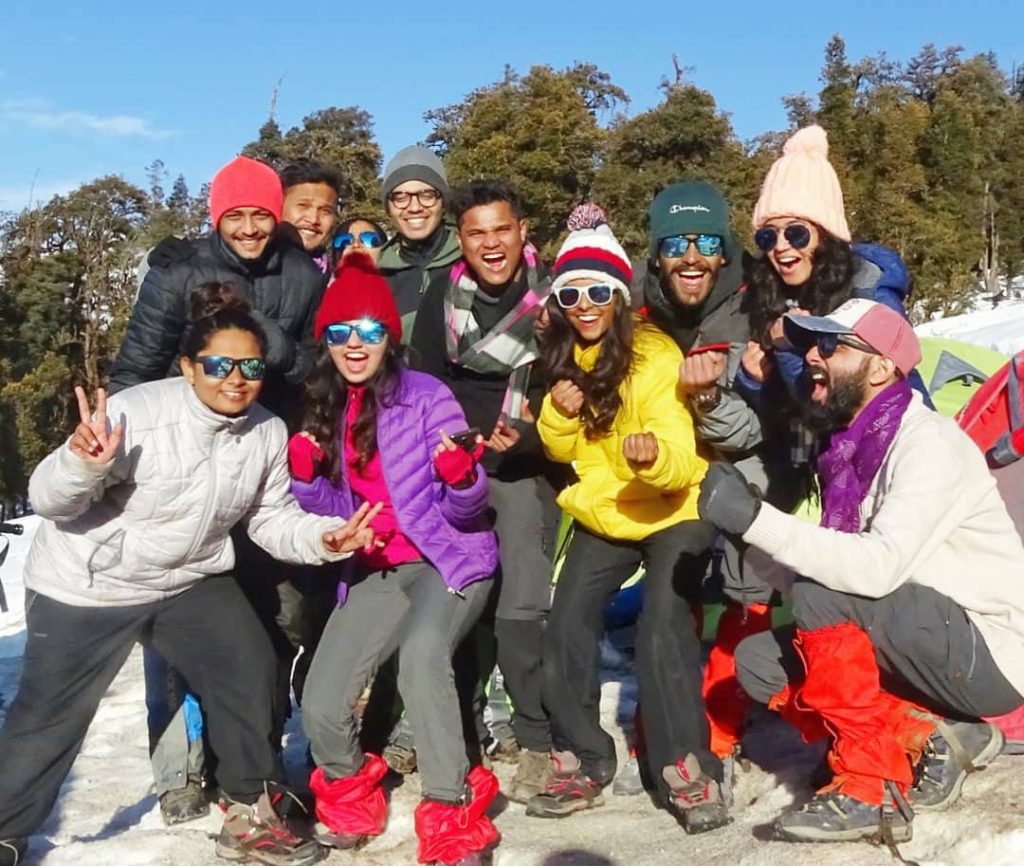 I for one never felt the need of having a group of people cheering me, I’m very self motivated that way. But it just feels so nice when you do have those people. 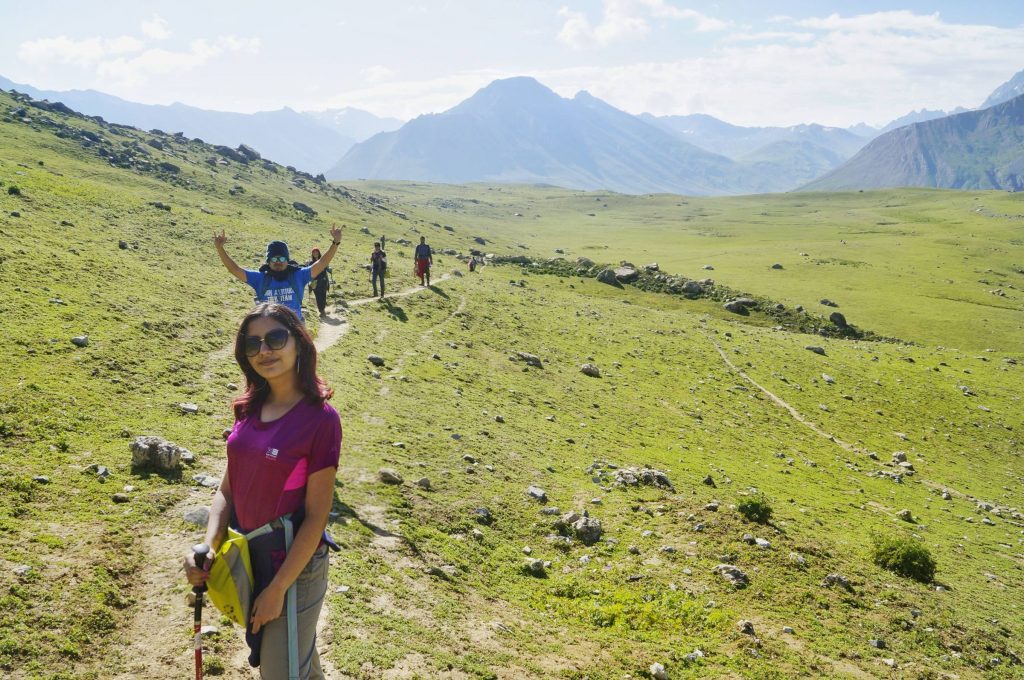 I was very poorly prepared for my first Himalayan trek.

I was slow and got tired very easily, but because of my amazing trek-mates who waited for me, walked with me and literally pushed me when I couldn’t walk, I felt comfortable in the otherwise very out-of-my-comfort-zone situation.
From the second day the trek seemed to get better, I started enjoying climbing up and by the last day I just didn’t want to go home! 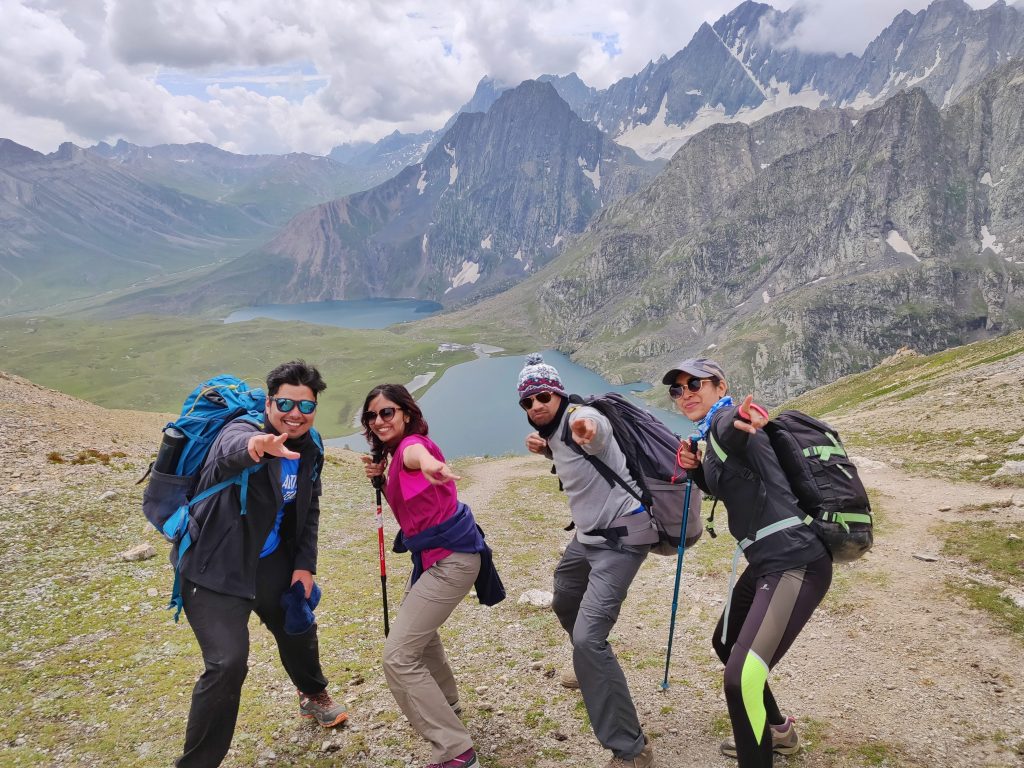 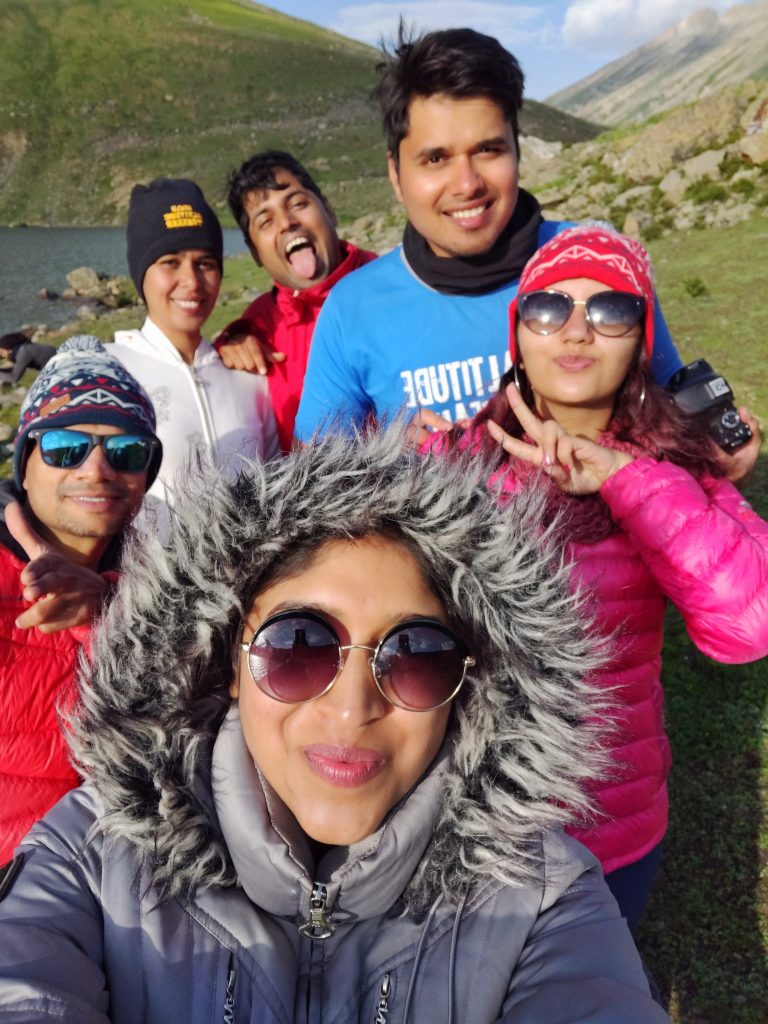 I know that even if they weren’t there I would’ve somehow managed to complete the trek, but I also know for a fact that the trek in the Himalayas wouldn’t be nearly as memorable as it was with them.

Being a pampered kid who got everything at the drop of a hat, that Himalayan trek in a way was my first real world challenge. It was after doing that trek that I realized the importance of having a good circle and appreciated my friends a lot more after coming back home. A very important life lesson learnt indeed. 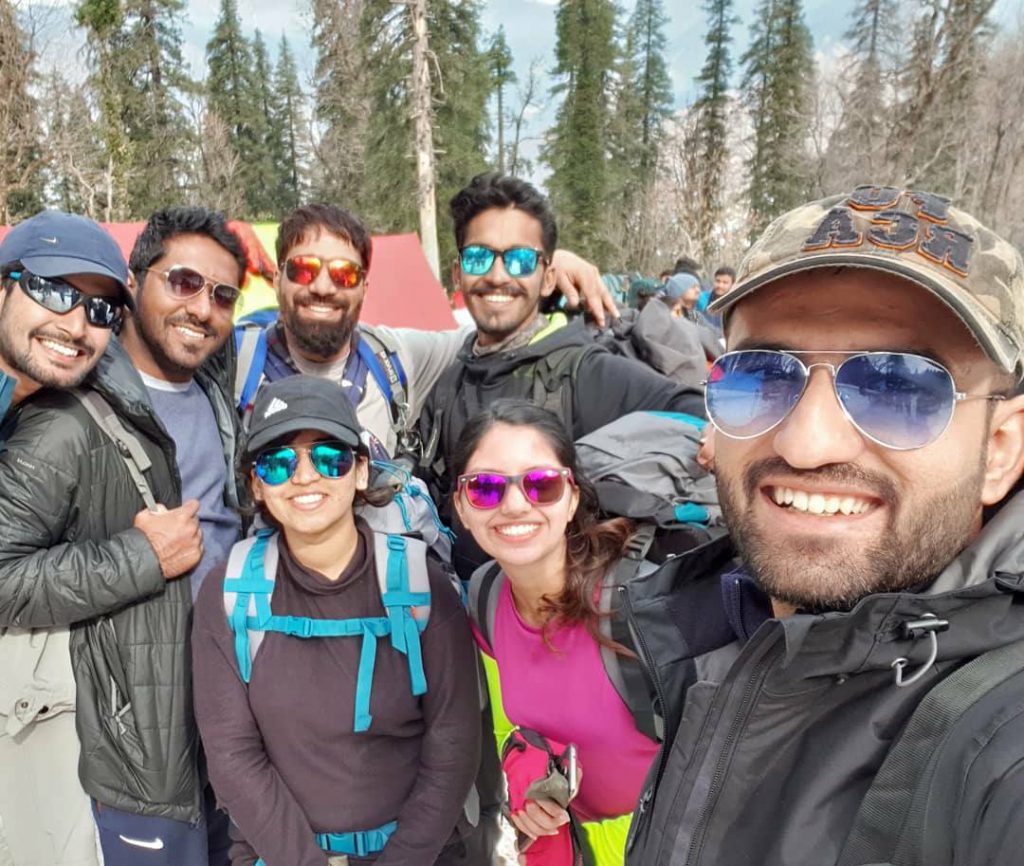 Read next: 12 easy DIY treks in and around Mumbai

Lesson #3: You are just a tiny spec in this huge world.

It was about 3am when I suddenly woke up.
I stepped out of my tent and it felt as though I was still dreaming.
How much ever I try to describe it, you won’t come to know how beautiful the sky really is until you go on a Himalyan trek! 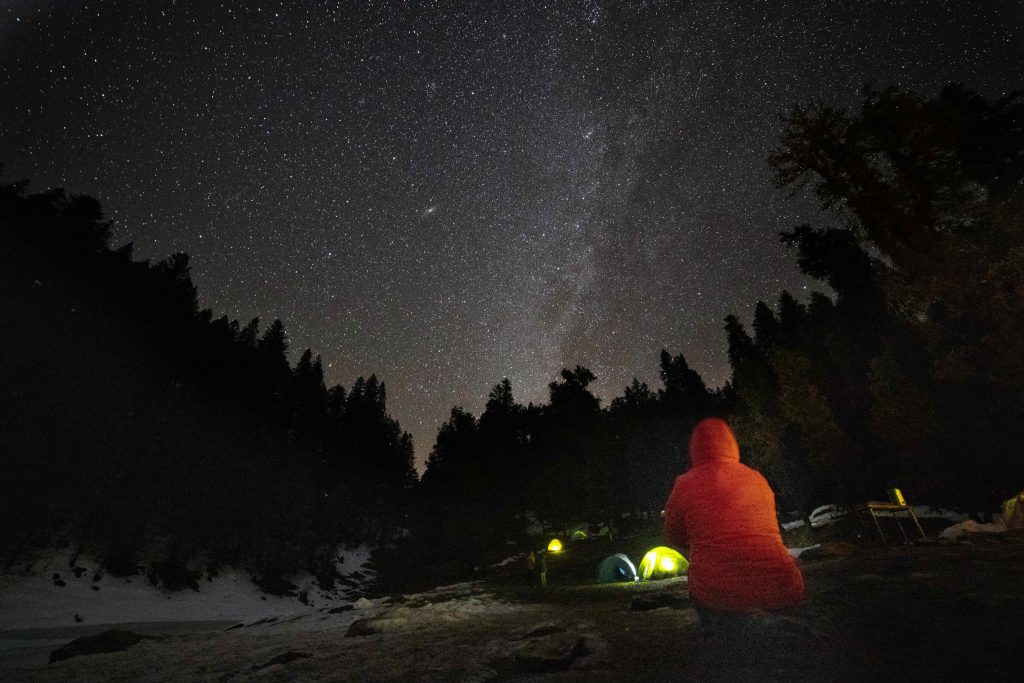 It was pitch dark and pin drop silence. Everyone was fast asleep while I sat there just taking everything in.

The sky was lit with more than a million stars, the moon was radiating the gentlest light and the sound of the stream close by…something just clicked inside.
We’re all in our own bubble obsessing and squabbling about things that don’t even matter!

It’s in times like these that you come to know how unimportant your stupid problems are…and that there is so much more to life.

It was sitting in that quiet valley against those massive mountains that made me realise we are all a very very small part of something colossal.

So the lesson the mountains taught me is the least we can do is spend our share of time on this planet without cribbing and by making the most of life.

Lesson #4: Believe in yourself.

The trek was Kedarkantha, we were climbing a very steep slope in the darkest hour of the night to hopefully make it to the summit by dawn.

I wanted to start 2020 by seeing the first sunrise of the new year from the top of a snow clad mountain…that moment is what I was waiting for all along. I had imagined how beautiful it would be over and over in my head, and finally here I was reaching closer to it with every step I took.

We started our summit climb for Kedarkantha at 3am as a group. It was excruciating to climb peak after peak in -20°C amidst wild winds.

When I was only a few steps away from the summit, I looked around to find nobody I knew. Everyone from our team had either reached or was far behind. People who were climbing with me began sitting where they were. I just couldn’t climb anymore and the sight of people settling around was very tempting.

The sun was about to rise. I knew I would eventually summit but what I had dreamt of was to see the sunrise from the top, and hence began climbing again. 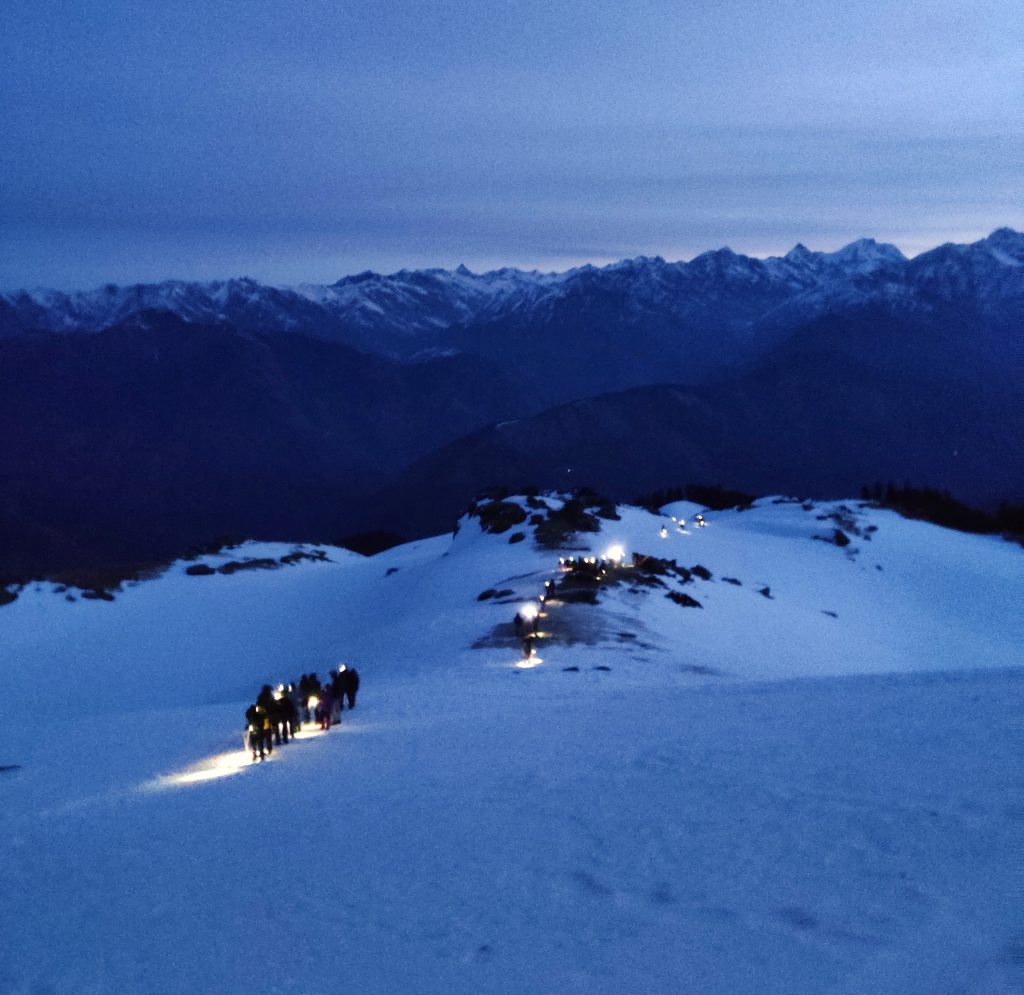 Those last 15minutes were the hardest part of the whole trek.

But the moment I reached, the sun rose and I began to cry. It was mainly due to the extreme cold, the wind, AMS and dehydration but also because I accomplished what I had put my mind to; because I didn’t give up and I was here standing on top of Kedarkantha seeing the most beautiful sunrise from the peak.

I believed in myself and was amongst the first 10 people in our batch to summit. 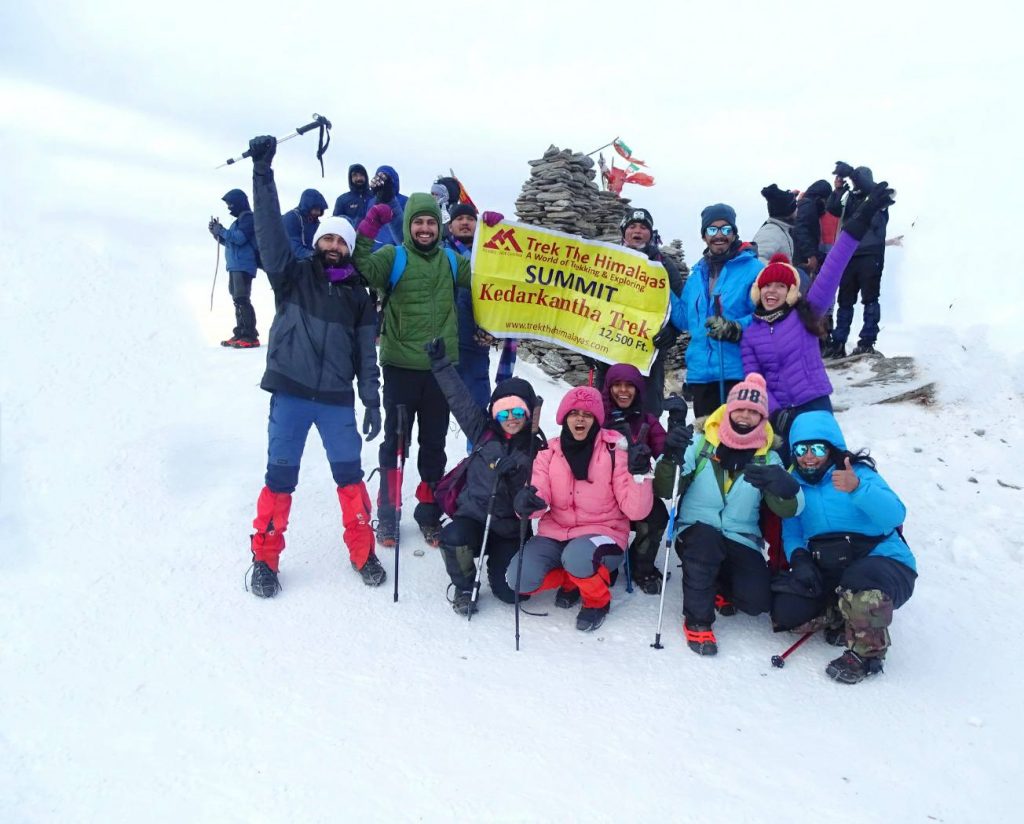 Just like the trek, even in life you may start together but as it gets harder there might come a time where you have to fight your own battles. Where you might feel like giving up even though you’ve almost reached. In those times choices matter the most. And I hope you choose to believe in yourself because we’re so much stronger than we think!

Lesson #5: Be open to new experiences.

Every time you go to the Himalayas, you’ll be stunned at how much you’ve learnt. Every minute that you spend in the mountains accounts for something.

The warm Kahwa after a long climb, or a valley full of flowers, spotting an exotic bird or just simply walking in silence…you learn to focus on being present in the moment. And really feeling your emotions. Being connected to yourself. 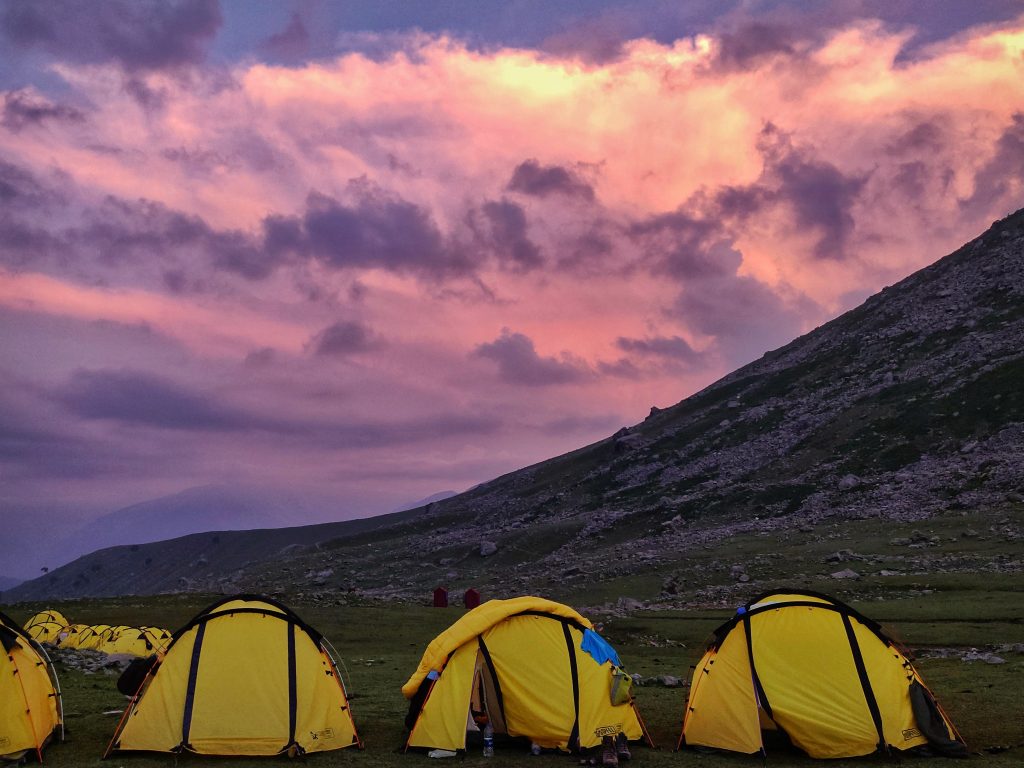 From our campsite, at night we could see the milky way, spot different constellations and even saw satellites taking rounds of the planet.

I spoke to army men about their adventures. I’ve had the deepest conversations about life with my trek mates. I’ve done zumba in the Kashmiri valleys and I’ve also gone speechless witnessing a sunrise I’ll never forget.
These are experiences that enrich you as a person. 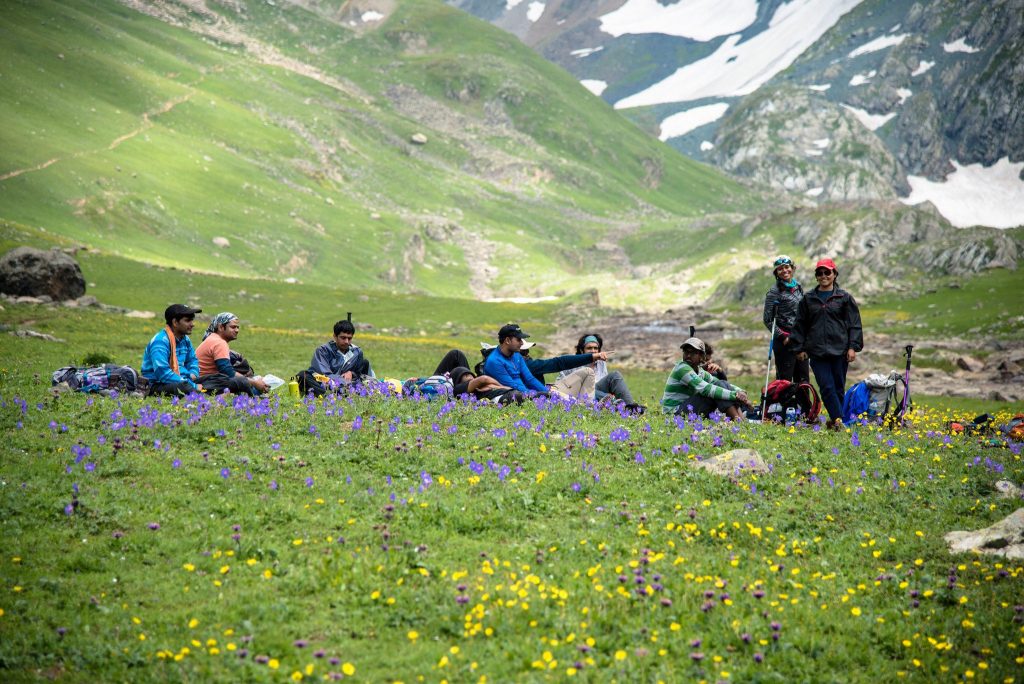 Ever since my first Himalayan trek I’m always looking to try something new, something different. Be it packing my bags and moving to a new city or learning a new language. I do get nervous but I now know myself enough to say I can handle whatever comes my way.

So these are some of my reasons to keep going back to the mountains and why I absolutely wholeheartedly LOVE trekking! It might be a little daunting initially so keep an eye around this space because I’ll be helping you with everything from ‘properly’ training for your treks to how to choose the best one for you. 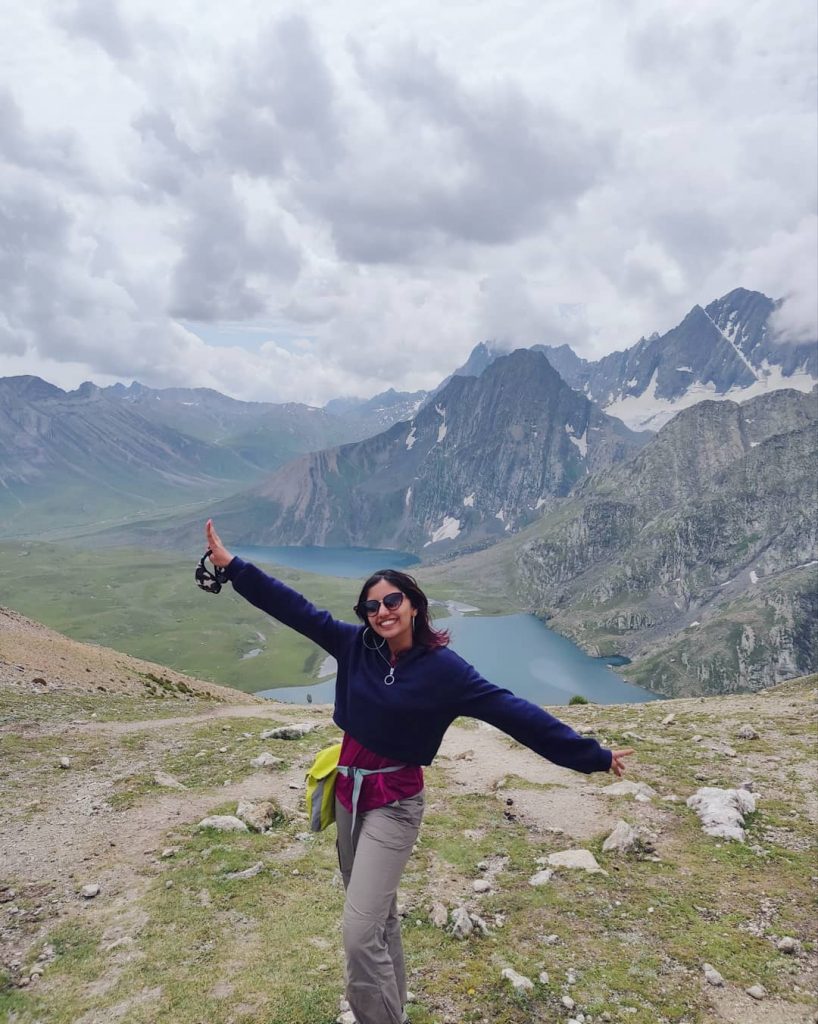 I hope this motivates you at least a little to embark on your next adventure, if you have any thoughts or questions do let me know in the comments section below!

Read next: Why everyone must take a trip to Alleppey at least once

34 Thoughts on “A Himalayan trek: What trekking in Himalayas taught me about life” 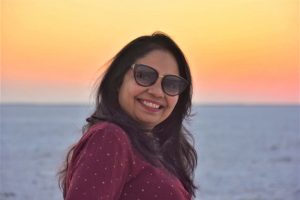 Hello! I am Nilima Gautam, The Traveling CA as you know me. I’m a Chartered Accountant and a banker with a passion for travelling. 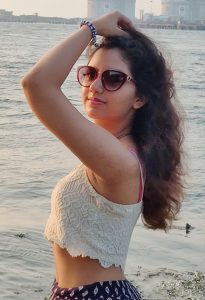 My daughter Shreya brings a fresh perspective to the same. She’s young, free-spirited and all about spontaneous trips, treks, backpacking & solo travelling. 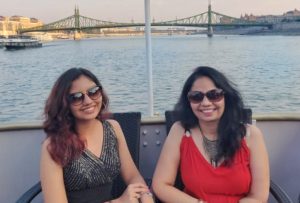 We both love traveling in our own styles, embarking on different journeys and this blog is a cocktail of easy paced travel blended with adrenaline rushing adventures.

Can a trip to Kashi be complete without Kashi Vish

Dev Diwali in Varanasi! ✨ We were literally in a

After two years of waiting finally all the festiva

A lovely weekend spent in a riverside resort in Ka

Such a special occasion. Celebrating our 76th Inde 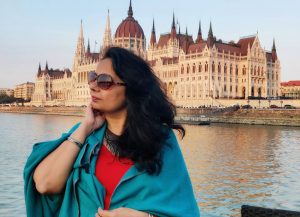 Hello! I am Nilima Gautam, or The Traveling CA as you know me. I’m a Chartered Accountant working in a bank by the day, and the rest of the time I’m either working on planning my next trip or reading about a new place. 🙂

Can a trip to Kashi be complete without Kashi Vish

Dev Diwali in Varanasi! ✨ We were literally in a

After two years of waiting finally all the festiva

A lovely weekend spent in a riverside resort in Ka

Such a special occasion. Celebrating our 76th Inde